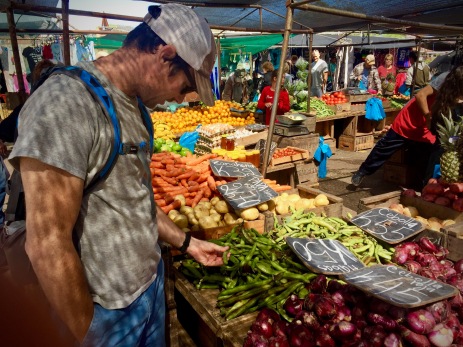 At the Saturday Market

The wind is really wuthering today out on the moor.  Debbie is reading me “The Secret Garden” and now every time a gust springs up, whistling in the rigging, I think in an Irish accent, “ the wind is really wuthering out there on the moor”.  An Irish accent, because even though the book’s characters speak a strong Yorkshire English dialect, Debbie can only imitate an Irish accent.  All this to say, the wind is strong today and I am not sure we will be able to get off the boat to go to the Saturday Market.

Since we sailed south of the tropics, it is a fairly normal thing, getting marooned by wind to Dawn Treader.  In Enseado do Pinheira, just south of Ilha Catarina in Brazil, we spent 2 weeks aboard, unable to row ashore against the constant near gale.  Even if we could the thundering breakers would have made landing on the beach dangerous.  Here in Priapolis, Uruguay we are in a marina preparing to continue southbound.  One would not think wind would prevent disembarking in a marina, but when it blows hard Dawn Treader gets pushed off the dock, the lines get bar taut, and only a tightrope walker could confidently leave the boat.  Here wind direction effects the water level more than the lunar phase and strong winds can make leaving Dawn Treader either a leap down or a vertical climb up.  Since Dawn Treader is bow tied to the dock, we find ourselves at times dangling precariously from the bowsprit while we time our jump.

If we do get stuck aboard we are well prepared, that is to say we have water.  Yesterday we glued down with epoxy the new tank top cover replacing the old rotten plywood.  After placing the epoxy smeared piece on the floor I sat on it for about 2 hours while the glue set.  There are certainly alternatives to using human weight to ensure adequate bonding, but I was really excited about the prospect of feeling productive without really doing anything.  Debbie fed me peanuts while I sat there.  Content, I did not think of it at the time, but a little “Secret Garden” would have paired perfectly with the peanuts. 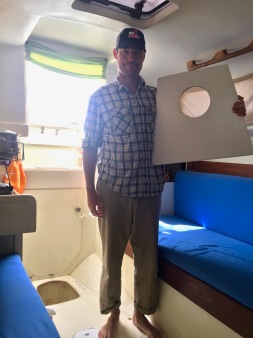 Waiting for the epoxy to set

So yeah, we have plenty of water and we even prepared further by purchasing yesterday a bottle of wine.  We figured if we got holed up, it might be nice to have a bottle of vino.  Unfortunately we drank it last night with popcorn and the movie, “zootopia”, so our preparation may have not been adequate.  Perhaps, before the afternoon when the wind really gets to wuthering, we will be able to brave the disembarkation and get another bottle.  Wine here costs about 2 dollars a bottle, but it is no “Two buck chuck” wine, it is actually good.  Not quite as good and cheap as the Azores where we were greeted after three weeks at sea by our Swedish friend Nicklas excitedly exclaiming, “the wine is free!” (sometimes in the summer it is literally free).  But the wine here is a staggering improvement over Brazilian vinho and certainly a sign of what is to come in Argentina and Chile and their world famous vinyards.

We will see what the wind has in store for us.  My bet is we get off the boat, if the Saturday market is not enough of a motivator, maybe the wine is.