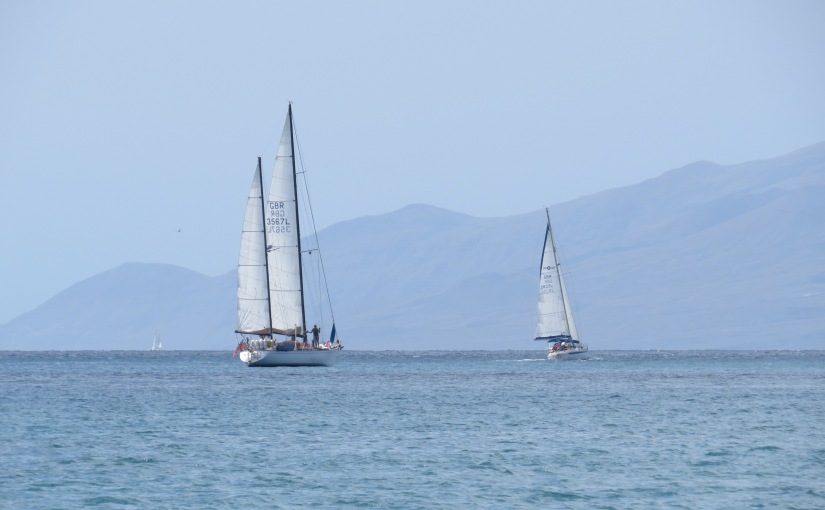 The sun is shining on Mindelo! After nearly two weeks of mostly gray skies and intermittent drizzling rain, our battery bank is now beginning to claw out of a deep solar deficit. At the dreariest times we were regularly seeing daily energy productions of only 4 amp hours. This is just enough electricity to power a single 100 watt lightbulb for 30 minutes, or an angle grinder for a mere 2 minutes. Typically we need 10-20 amp-hours in a day to meet our consumption levels. During the last 4 cycles, we have seen over 25 amp-hours/day generated. We are still a few cloudless days away from being fully recharged, but we can now loosen our miserly grip on energy conservation. Hence, the computer is now charged!

Once I fully recovered from a stomach virus, It was Debbie’s turn to be sick. Our staggered illnesses meant we have spent the majority of our time in Mindelo resting aboard Dawn Treader in the anchorage. This has given us plenty opportunity to observe the harbor traffics’ comings and goings.

Mindelo has a special sailor buzz much like Horta, Azores or St. George’s, Bermuda. The vast majority of sailboats had to make an 800 mile passage to get here and will be making an 1800 mile passage from here to the Caribbean. This must be a particularly busy year because the usually rock steady trade winds have been fickle, causing a bottle neck of weather waiting voyagers in an already crowded harbor. For example, many ARC boats embarking on non-stop passages from the Canaries to Caribbean, diverted to Mindelo to wait for stronger winds. Standing room only crowds at the floating marina bar/dinghy dock discussed chiefly their speculations of the wind’s whereabouts.

Now, with the sun, the winds have returned! Good strong NE’ly trades, predicted to continue through the run of the forecast, have eager sailors queuing their yachts in front of the fuel dock to top off their diesel and water tanks. The harbor is clearing out fast as cliques of voyagers informally organize into mini-regattas. Yesterday we watched the small boats leave. The day before it was the catamarans. This morning saw many french yachts depart, and some Brits are weighing anchor now, our friends aboard SY Florence amongst them.

We are thankful to have been a part of this caravan of camaraderie as we watch friends and almost friends disappear over the western horizon. Joining the European sailors in Porto Santo we became familiar with many boats as we transited the East Atlantic Islands. Even crews with whom we never spoke, felt like travel companions. Our divergent path is now apparent, they are westbound in a quest for longitude, and we are southbound in search of latitude. We wish them all safe passage. Perhaps we will meet again out there. 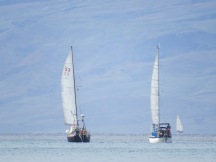 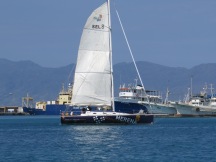 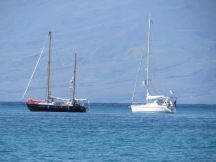 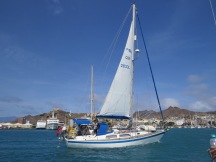 4 thoughts on “Energy, Illness and Farewells in Mindelo Harbor”