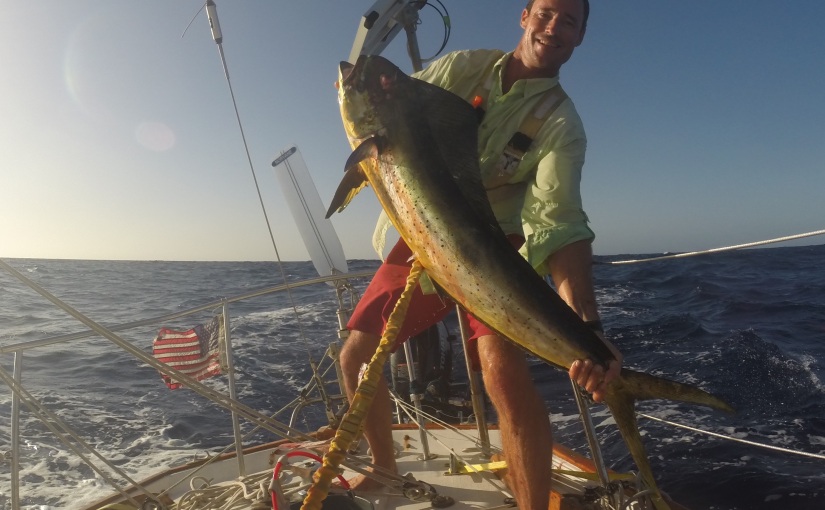 Approaching 4 weeks in Mindelo and fully recovered from a stomach bug, we decided it was a good time to move. After scrubbing below the waterline and filling the water tanks, we checked out of Mindelo to sail 130 miles to Tarrafal on Santiago. The passage was short, under 30 hours, but proved to be exciting.

As we sailed out of the harbor, I remembered the crew from “Dreamin’ On,” a large sport fishing yacht we met in Horta, mention they had caught the world’s largest marlin of the year in Cape Verde (1290 lbs). I figured this meant the fishing was good around here, so I cut open our salt seized tool bag filled with hooks, swivels and a handful of walmart fishing lures. I found an unopened package containing a white feather jig with a shiny new hook and tied it to our push pit mounted fishing real with a piano wire leader.

The wind had moderated and backed some from the prior week, but we still had a brisk close reach to make course to Santiago. With Dawn Treader steadied on a Southeasterly heading we put out the feather jig. Fishing from a sailboat must be the least hands on fishing experience. We deploy a single lure and quickly forget about it as other nautical duties engage our attention. I was washing dishes when I heard the distinct clickity-zip of monofilament line racing out of a fishing reel. Instantly I remembered that we were fishing and yelled out to Deb, “Fish On!”. “It’s huge and beautiful!”, Deb returned as I scrambled out the companionway. I thought it must be a Mahi Mahi and was quickly proven correct when it took flight trying to spit the walmart lure.

Not having a fishing rod, combined with the pitching, rolling, and heaving of a close reaching sailboat in a fresh breeze, made the task of landing the fish interesting. Despite the challenges, the Mahi was hooked adequately and we had it alongside in short time. I had additional difficulty getting it aboard with our tiny gaff, but after a couple clumsy stabs, managed to pull the lively catch into the cockpit. The brilliant yellow and green fish spanned the diagonal length of our footwell, and I thought this is about as big an animal we could handle on our little sloop in these conditions. With the sharp hook, gaff and filet knife in such close proximity to an understandably agitated creature, catching fish has got to be one of the most dangerous activities aboard a small cruising sailboat: second probably only to cooking.

Dawn Treader, when dialed in properly, will tend to herself for long periods of time. But we felt a since of urgency in clearing the deck so that we could refocus on safely navigating our home. Within minutes of landing Samuel (Debbie named him), we had the poor fellow filleted. I am always given pause killing anything, even mosquitoes. Killing such a beautiful creature really tugs on the heart strings. Deb and I both said a little prayer of thanks as we returned the cleaned carcass to the ocean. As if sent to reassure us that nothing goes to waste, a pod of killer whales showed up (perhaps attracted to the blood draining from the cockpit scuppers) and quickly consumed the remains. One Orca followed us for 5 minutes flashing its belly from underneath the keel and broaching close astern. Tony (Debbie named him too) probably wanted us to throw him some more Mahi Mahi niblets, but we were too in awe to do anything. Neither one of us had ever seen a Killer Whale.

Without refrigeration and unsure about how and where aboard to salt and dry fish, we had quite a task ahead of us to consume all the meat before it turned. We immediately pan cooked 5 large filets with onion and peppers in olive oil and soy sauce. We ate all five that night and almost felt drunk from it (I guess because we don’t eat a lot of meat). The rest of it was cut into smaller chunks and partially cooked in the hot pan. The next day after anchoring in Tarrafal, Debbie made a glorious fish soup cooking the Mahi Mahi the rest of the way though. We ate the soup multiple times though the day and it even lasted us until the following morning when we combined it with chopped veggies and basmati rice. We felt accomplished finishing it off. 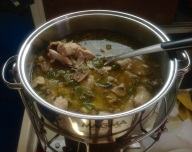 Last of the Mahi Mahi

Now we are resting from the voyage and getting ready for the business of next week. We plan to make the bus trip to the capitol on the other side of the Island early in the week. There we will visit the Brazilian Consulate and start the Visa process.

15 thoughts on “Fishing in Cape Verde”