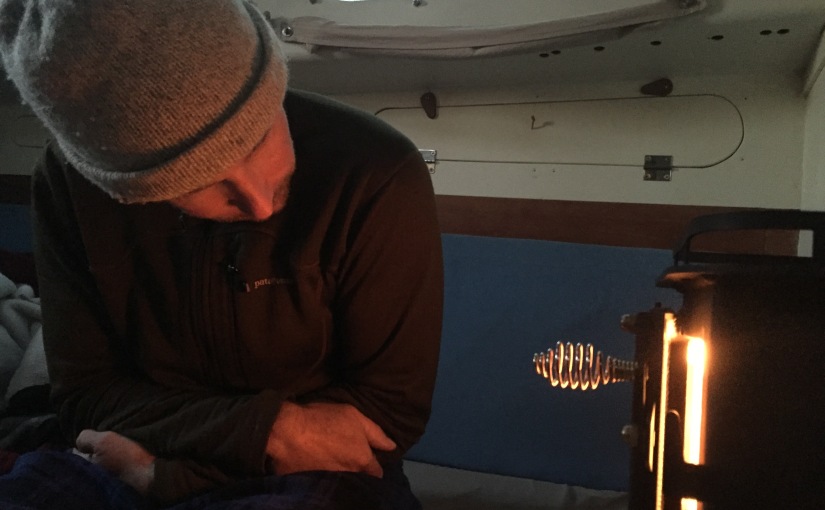 We are loving springtime in Uruguay, and we’ve made the time to reflect back on winter in Uruguay with our new Cubic Mini Cub wood stove. We hope you enjoy the video!

Thank you Chuck for bringing us the wood stove, and for all the tips on birding! 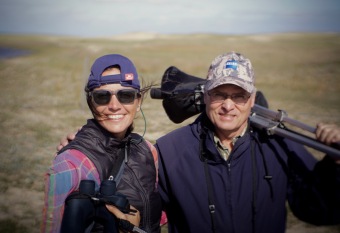 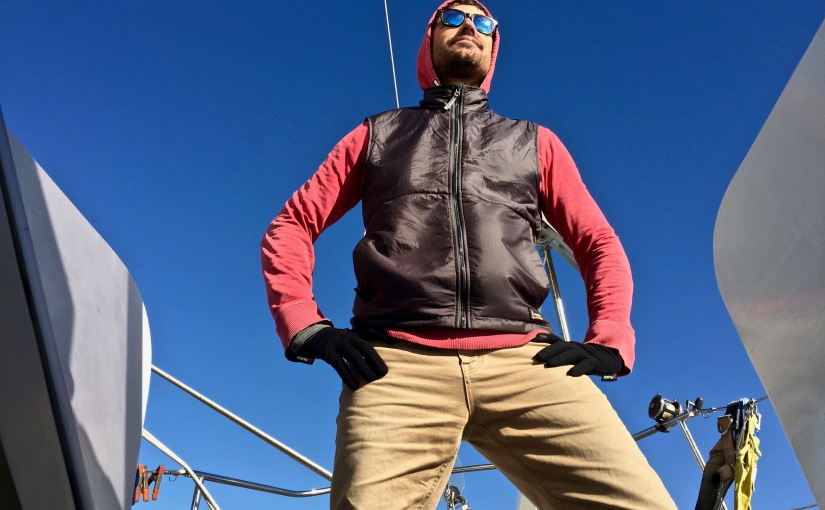 We recently sailed from Juan Lacaze to Piriapolis in the Rio de la Plata in Uruguay. This is the first step towards getting moving after a summer spent dockside. 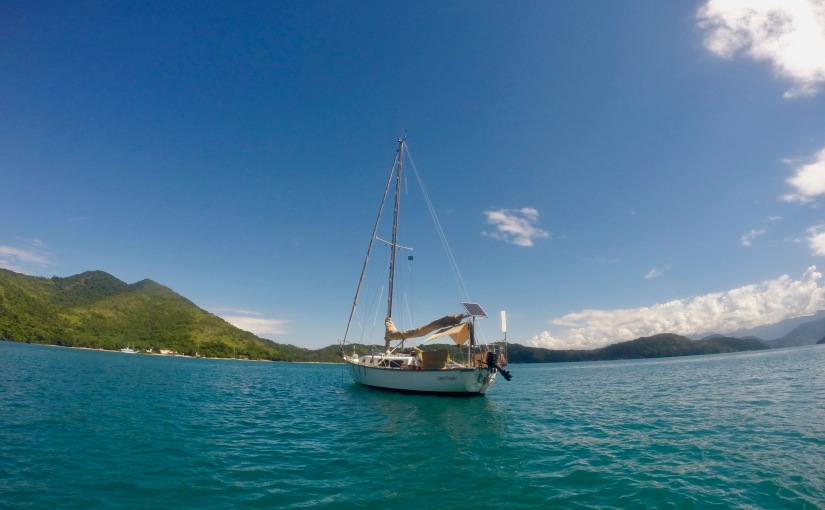 Brazil is ENORMOUS!  2000 miles and 7 months later and we have still only seen a minuscule fraction of this fascinating, beautiful, energetic country.  In the maps of our minds, we have now illuminated the coast of Brazil from Salvador to Rio Grande do Sul. END_OF_DOCUMENT_TOKEN_TO_BE_REPLACED

Our blogging hiatus is over! We have new electronics and a new video!

Early this year we had an great passage from Brava, Cape Verde to Salvador, Brazil. The first minute of our new video shows clips from day one of an 18 day voyage. We set sail on a very wavy day, and had fresh winds for three days. END_OF_DOCUMENT_TOKEN_TO_BE_REPLACED 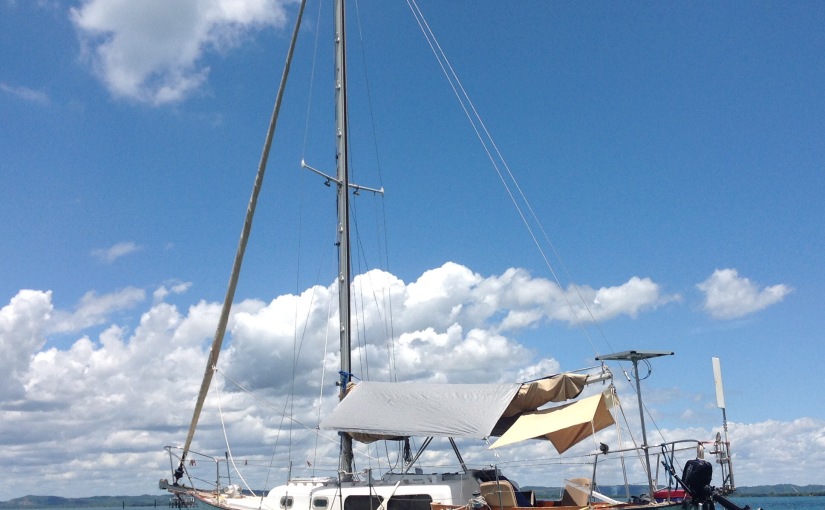 World cruising is challenging and difficult, but we have tools to avoid struggle. Mentor and good friend James Baldwin has generously given us his invaluable advice, and the simple insights that have echoed most in my mind are “keep the boat driving,” and “it doesn’t have to be a struggle.” To prevent or reduce struggle we adapt. To adapt we endure and adjust. Over time we are becoming stronger and smarter.

We are currently adapting to some new circumstances, END_OF_DOCUMENT_TOKEN_TO_BE_REPLACED

Our time in Cape Verde has come to an end. We cleared out with immigration, left Mindelo, and sailed to Brava for a short visit before the Brazil passage. Brava is hard to bypass. It is a quiet Island with friendly residents. Farms dot the mountainsides on steep terraces.

END_OF_DOCUMENT_TOKEN_TO_BE_REPLACED 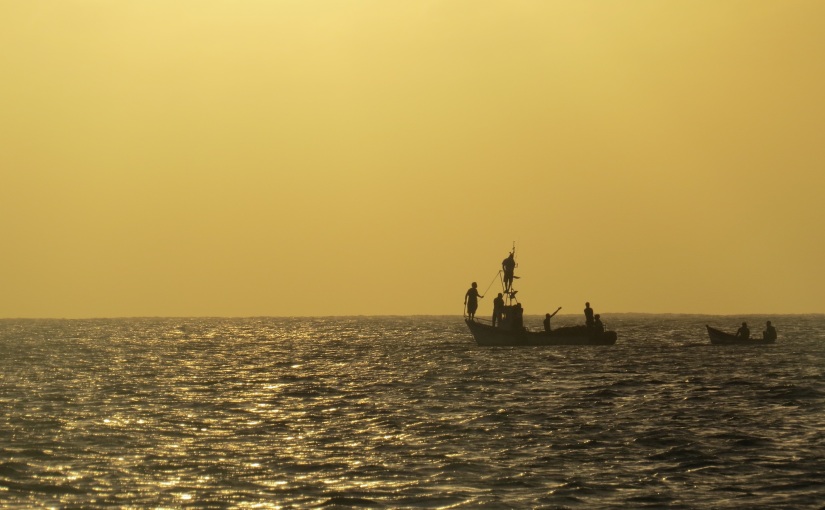 The Harmattan is dust laden air blown from the Sahara to Cape Verde by the strong winter Northeast Trade Winds. Sailing in the Harmattan feels otherworldly. Like fog the visibility is greatly reduced, at times less than half a mile. But the air is dry, a muted blue can still be detected in the sky overhead, and a horizon line can oddly still be perceived. The sun filtering through the reddish brown haze turns the sky sepia like in an old-timey photograph. END_OF_DOCUMENT_TOKEN_TO_BE_REPLACED 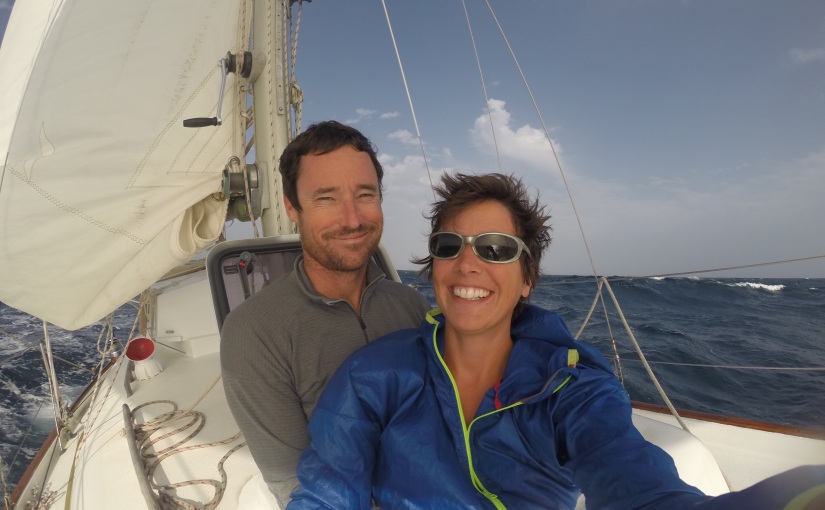 Over the past few months we have been sailing Islands in the Azores, Madeira, Canaries, and Cape Verde. In the Azores we experienced variable summer winds, and from Madeira southward were the Northeast Tradewinds. All in all, the sailing was quite lovely. Next, we’ll be crossing the Atlantic to South America.

Approaching 4 weeks in Mindelo and fully recovered from a stomach bug, we decided it was a good time to move. After scrubbing below the waterline and filling the water tanks, we checked out of Mindelo to sail 130 miles to Tarrafal on Santiago. The passage was short, under 30 hours, but proved to be exciting. END_OF_DOCUMENT_TOKEN_TO_BE_REPLACED 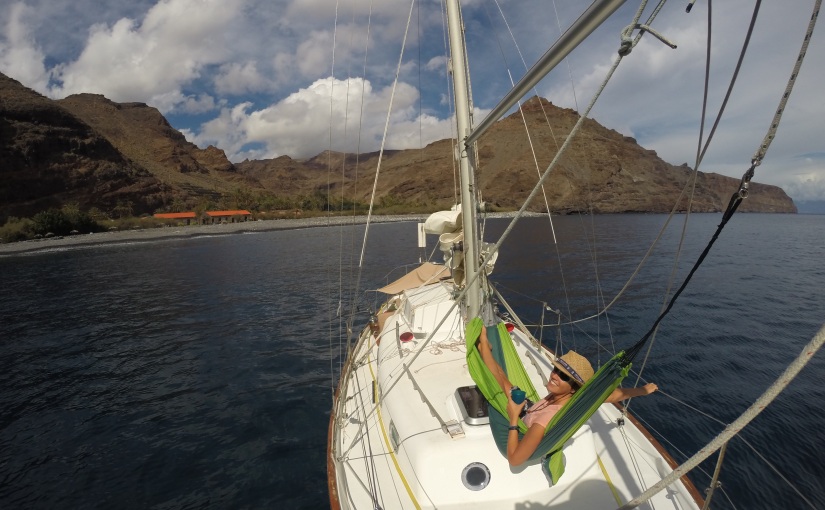 Before expiring visas forced us to leave the Canaries, we crammed in as much hiking, swimming, and birthday party-ing as possible. Much of it was nostalgic as we remembered the same anchorages and walks from 2 years prior. It was then that Deb flew to meet me aboard Dawn Treader and assess what exactly she might be getting herself into. It was fun retracing our steps and we felt we were leaving a bit too soon, but there is no negotiating with immigration officials. 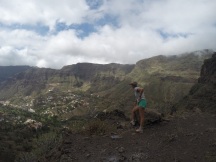 Putting out the vibe? 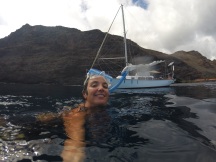 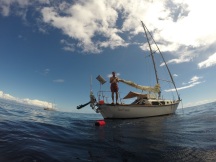 About to dive in

View of the anchorage from above

The Sail to Sao Vicente from La Gomera was fast by Dawn Treader’s standards. The wind started out light but filled in during the night and pushed us 113 miles the first day. The Northeasterly wind steadied at 20 knots the rest of the way and we saw daily runs of 141, 131, 128, 134, and 126 nautical miles.

The seas continuously grew and a handful of 15 footers rolled under our keel toward the end of the passage. We measure seas by standing in the cockpit and while in the trough we stare out to where the horizon should be. If the horizon barely disappears below the wave crest, we figure that’s about a 7 footer (I am 6 foot and standing 1 foot above sea level). If we stare out and only see halfway up the wave, then that’s about a 13 footer. We had a couple waves splash into the cockpit and fill the footwell with seawater. One wave even found its way into the cabin through the small hatch under the dinghy. That night I made a note to find a way to better shield the hatch from waves in Mindelo, as if I was going to forget the waterfall cascading onto my bunk. 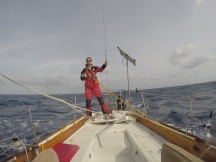 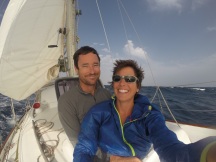 The sailing was fantastically easy. Two weeks ago we arrived in Cape Verde and I can still clearly recall each time we made a sail or course adjustment on the entire passage. We set the Jib deeply furled on a pole to starboard and did not touch it until arrival. We jibed the triple reefed main only twice which is super easy with our dual boom vangs to port and starboard. As far a course changes go, there weren’t any. The windvane auto pilot course control gearing broke early in the voyage making it somewhat inconvenient to adjust course. So we left it as it was, and it steered us straight to Mindelo.

Once in Cape Verde, we were immediately taken by the vibrant people and their unique and beautiful music. Then I became ill with a stomach virus and Debbie cared for me aboard the Dawn Treader for 4 days. Slowly we are venturing out again and also squeezing in some chores and projects. Debbie cooked a wonderful and bountiful Thanksgiving dinner which we shared with friends Matt and Amy from SY Florence. Next we have our sights on Santiago to obtain our Brazilian visas.